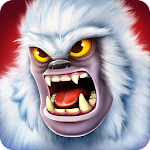 An evil wizard has enchanted the magical Beasts of Avantia - only a true hero can free the Beasts and stop them from destroying the land. Are you the hero Avantia has been waiting for?

Get ready for action-packed combat against multiple foes at once, timing your attacks, blocks and dodges to defeat your enemies. Complete quests to upgrade your equipment and give you the edge.

Only your skill and bravery can bring peace to the Kingdom of Avantia - it’s time to become a hero in BEAST QUEST!

• An epic journey through the huge open world of Avantia!
• Epic battles against the mighty Beasts!
• Collect lost treasures and powerful artifacts!
• Level-up and upgrade your equipment!
• Master an action-packed combat combo system!
• Hundreds of challenges, secrets and in-game achievements!

Find out more about Miniclip:
http://www.miniclip.com

Premature rating Only a few hours into it, really nice little game atm. Concerned about other players reports on heavy crystal requirements which are coming in at barely a trickle (f2p) but for the moment im content to spend some time on it. Feels a great deal like an open world rpg with an unusual combat system, fits very well on a touch mobile. I will update when i know better. Definitely worth a look

Amazing It's got fantastic graphics, but not too much so to make it lag in a mobile device. It's not too hard to collect resources for leveling up, but enough so to give you a challenge, and gems are easy to come by. This game is the best game I've ever played on my phone, hands down! When I come into some extra cash, I know where I'll be wasting it :D

Scammed...bought in game gems never received contacted no response...will change when addressed. Best action questing rpg i have ever played on a mobile expand the hell out of it with content. I am seriously blown away at fun factor and complexity of the game with simple controls very well laid out and smooth a masterpeice!

Beast QUEST Sometimes lagging. Can you please add some more features like a cooler equipments and spells for battle like lightning and fire? It would make the game more exciting if there were also more different kinds of creatures to battle with and more resources for upgrades.keep up the good work guys nice game.hoping for better updates thanks

Performance Improvement!? The hell! It was running smoothly since i last played, then this update came, now i can't even play for hours because the lag is so bad that i can't even see incoming attacks! I'm going to wait for more of your 'updates' and see if there are any improvements.