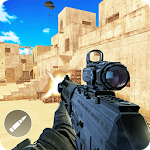 Counter Cover Killer is the fast-paced first-person shooter where you play as a dangerous agent on a task to complete all the missions. This ultimate action game will take you to the world of wars, where you’ll be using army weapons to conquer battles. Take part in the combat and assassinate all the targets from the top of a helicopter. The missions in this game will take you to a new planet of wars where you can use all your specialized skills to survive deadly missions, attacks and shootings.
Intriguing missions
Each level is assigned with a secret mission and intriguing tasks which must be accomplished carefully in order to encounter your enemy and assault your Target. Enter the Battle Royale to experience the ultimate combination of action and power as you combat your way across the battleground. This is a chance to improve on your weapon handling skill and get ready to pull the trigger and test your sniper shooting skills.
Unlimited shooting adventure
Grab your rifle and shoot out at powerful Panzers and choppers, drones and oil tankers on the deadly battleground. watch out for enemy base with the help of mini map for survival and completing the mission. As you keep progressing in the levels, always try to equip yourself with Granite and new weapons which can be purchased using your earned coins. Experience real-time kill shot battlegrounds of FPS Shooting games. It is one of free online shooting games so you can compete with real sniper shooters around the world.

IN - APP PURCHASES AND ADS

Stock up rewards and coins from boundless battles to unlock your desired Rifles. You may also purchase or upgrade to new war weapons to enhance your fighting skills.

Epic Army Weapons and Upgrades.
You can supply yourself with an insane arsenal of combat weapons and fight your way against brutal enemies in the deadly warzone. Take part in all sorts of missions & tasks to increase your power and collect fantastic rewards. Reload, stack up the bullets and fire to eliminate the last of the enemies. Take Control of the battleground by taking on each opponent and become the king of this game. This 3D action game play will bring you a whole new level of gaming experience. What are you waiting for, download this endless firing and action game in your Android mobile for free!!