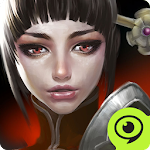 The sixth character [Fighter] has arrived!
A female warrior who treasures the mystery of the East!
Now, become a Fighter and vanquish the great evil!

Approved by 35 million users around the world!
Darkness Reborn is an action RPG that you can't find anywhere else!

An exclusive lineup of powerful classes!
- Warrior, a rock-hard physique with destructive skills
- Kunoichi, the ruthless assassin of darkness
- Mage, the mysterious sorceress with a dancing chakram
- Daemon Hunter, penetrating obstacles with his powerful and precise arrow storm
- I will destroy anyone standing in my way. Savage, the Double Ax of Destruction!

Unparalleled scale and impeccable real-time content!
Win the 3:3 PvP Arena and reach the top rank
- Monumental scale for mobile gaming! Conquer Boss Raids with clever team-play.
Rifts, dungeons for the party of 2 chosen elites
- The endless battle for victory begins! Prove your worth in the Fallen Labyrinth.

Fight the ultimate battle!
- Auto Battle System! Conquer the massive content at the speed of light.
- Customize your characters! Craft, Enhance, and Evolve to your heart's desire!
- 1,296 combinations of skills! Prepare for battle against the Devil's army.

** This game is available in English.
** There may be additional costs when trying to obtain certain items.

Great game The game is good. The story is okey. the PVP, that is something you guys need to fix. Some players are low lvl, but with insane dps(attack) and Def. When you're competing with them you don't stand a chance. They roll over you and basically you're dead. Arrange so players with great dps and Def can fight each other instead of the best vs low. And then there is the lag. This has been the biggest issue with pvp. Ridiculous that it's not fixed yet.Why not may I ask?

Problem Been playing this game for three weeks and so far i'm enjoying it. but i encountered a problem the game said update 1.3.1 not found so i reinstalled the game and after that i loaded it but its stuck in a black screen after the google play image. please help!

Quiters wallfacers Gv m pleased that u gave me ur replies on the lag thing. the thing is can we have sanction to those mention on my title? coz its now rampant and it produce unbalance match. hope we an find was to stop those acts. thank u Gv good game ill be turning this to 5 star again.

Gr8 After playing this game a little over a year it's still good. How ever the savage tremor move is useless in pvp. In my opinion the move needs to be buffed both the poison and health replenish. And I wish more pvp levels were added. Other than that I still enjoy the game.

Black screen Game working perfectly now...recently opened 10 mystical boxes,disappointing?, but it's a great game no doubt, keep it up gamevil