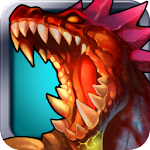 Defender II, the ultimate tower defense is coming with many new features!
Waves of monsters are attacking your castle. They move fast, strike hard, and never give up. However, Defender is more powerful than ever before! What's more, Lava moat, Magic Towers will fight together with Defender!

Game mode
# Local mode: Defeat waves of monsters.
# Battle mode: Compete with opponent - The one stays LONGER is the WINNER!


Watch out, intruders will be stronger and stronger. New BOSSES will come out as stage goes. Be the hero, and win the HONORS!

Any suggestion/feedback is welcome!

Free crystals don't work I have done several free crystal things and I have received none of them. I even signed up for Hulu and got nothing. I even did the did not get crystal thing and every time it keeps saying I was already awarded them...

Doesn't pay up after downloading other apps and accused me of lying when i contacted the so called customer service. Dont download apps for rewards, you wont get them.

Great game I love this game its really fun but the difficulty curve is too slow and there's not enough stuff to upgrade. Please make an update then I'll give 5 stars

Not perfect, but close Most addictive game ever. Great long term playability. But way too much grinding. Progression curve puts the game down. Still, it's the only game that i have never uninstalled from my phone.

GOOD GAME AND I HAD THE GAME BUT... After completing an offer to get gems which I still have not received they told me I received them and to have a good day after 2 sec of me sending the email WOW that's fast.. watch out maybe a scam but u will not receive any crystals which u really need to do most in the game.. have fun can't say I did not let it be known...