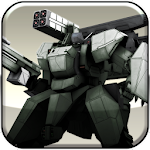 Get via Downloader 11M

From "Destroy Gunners SP" of delivery in high popularity, Significantly enhanced new title has been released as the second sequel!

・Battle scene has been changed into totally new maps and original stages of cold area!
・Missions and components of arms are doubled from previous title!
・If you have previous title"Destroy Gunners SP",you can play additional special mission!

This title supports community functions of score ranking and achievement by"OpenFeint".
The player can contest score and skill with players whole over the world.

"Every moving objects on this freezing ground are enemy. Destroy all of them."

Hours of fun It has a couple of misspellings and the controls are a bit sticky. Don't like how you level up faster in boot camp than in the main story. And I would like to know how your attack power affects your Mecha. Other than that, the game is very well made and I'm glad I bought it.

A little disappointed. You could have made it like the first D.Gunners where you can integrate the trial mechs into the story... I was shocked to have to start from scratch. ( ｰ̀εｰ́ )

Can't play All of the buttons are blank so o don't know what to press also everything i can see is in Japanese or something so j don't GEt it At all please fix. galexy s5 I will give 5 stars when fixed

Tricky I don't Speak Japanese so its annoying to have all the gibarish going on.... Over all awesome game tho

Please add new mechs, even ones that are 4 or 6 legged, on tank treads, ones that hover or fly, maybe even make one with huge shields on each arm with heavy melee damage please, thanks