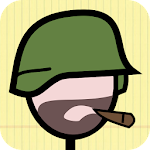 The Doodle Army™ wants you!
Enlist today and cut down wave after wave of enemies in this endless shooting adventure! Hear the sweet screams of your victims as you strafe them with submachine gun fire or explode them with grenades and roast their remains with the flamethrower.

The in game tutorial "Drill Sergeant" will guide you through the basics in Boot Camp. Soon you will be on your way to creating your very own heaping piles of bloody bad guy parts. See how far you can go before the enemy overwhelms you.

-Unlock and play various Boss Battles and Mini Games on your way to victory!

-Play as one of over 40 unlock-able characters in one of six battle zones.

THANK YOU:
Thank you to the users for your support and feedback. We read and respond to all legitimate suggestions and issues.

Great! Fun, easy, and not graphic intensive, so it'll run smoothly on even budget Android phones with lower powered processors. Some budget phones are now starting to get 64 bit gaming chips, but it's still fairly new so maybe graphic intensive games will work on those, but for those who don't have them I recommend this game. And it also takes up less memory! And no in app purchases!

Great game overall It's very fun and I sometines play for hours without ever getting bored. LOOOOVE this game. Only thing is..each level is endless. There should be someone or something there to pick you up at the end of each level like in Zombieville. Overall (great game, love it, good graphics, and wide selection of characters).

GUYS JUST SAYING This game is amazing and my favourite, but I just wanna say, this game was last updated on FEBRUARY 2013. They are not working on this game anymore, therefore, do not ask for suggestions as they will most likely not listen because this game is not worked on anymore. Sorry guys, but it's true. Great game though. 9.5/10

Its good but... I like the game overall. But you should address these problems, when u unlock a doodle it auto changes. Not a big prob but I get shot up when I change back. The enemies laser sniper rifle does damage far past the beam projectile. Also I'm on the last stage and it said I unlocked a new mission but can't see it anywhere. Can't get 3 stars on last stage.

Awsome bordem killer The game is awsome and lots of fun. Only thing is the weapon selector is to small. Should have a slide bar that comes up middle of screen that you can swipe to what weapon you want also maybe game should pause when selecting a weapon or dodle. Only other thing is please keep makeing more levels :)