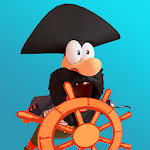 Go Go Pirate is a fun and joyful infinite runner game. In Go Go Pirate your main goal is to steer the pirate's ship by evading the obstacles such as rocks and wharf and water mills along the way.

Go Go pirate is somehow a memory game as well. As your bonus mission, in the game you have to memorize 6 items shown in the beginning of the game and find them respectively in order to maximize your score during the game. By collecting as many items as you can you will get an increase factor of:

So in Go Go pirate, you will get rewarded for both your concentration and your memory strength!

Go Go Pirate is an endless runner game similar to other counterparts such as Temple Run or Subway Surfers, however the challenges which the memory game adds to it, make the game play a bit more unique and different.

You can play Go Go Pirate with your friends, kids and family members and compete with each other for the highest score. Remember what makes this voyage interesting is not the distance of your journey, in fact, memorizing and collecting the treasures in the sea makes you the ultimate winner.

If you have any inquiries, please do not hesitate to contact us.
[email protected]
Show more
Older version of Go Go Pirate APK