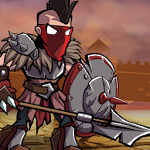 Begin your magical adventure in HonorBound today! Download now and immerse yourself in a mystical world where the likes of dragons, ogres, orcs, and even the undead wander the earth. Evil has taken root in the once peaceful world of HonorBound and it’s up to YOU to restore the balance. Are you a warrior? A rogue? A wizard, cleric or a knight? You decide!

Ally with hundreds of different heroes to create the ultimate squad. Harness one or even all five of the mystical elements - fiery Terra, wild Primal, celestial Lunar, pure Spirit, and unknown Abyss to help defeat all that stands in your path. Recruit magical beasts, battle-tested warriors, and other allies from the world of HonorBound to assist you in your quest. Build your own unique strategy as you collect more allies and customize your squad!

Battle in epic PVE boss fights and collect rare loot and legendary treasures. Equip these treasures to make your squad even stronger! Team up with your friends and join a clan to find even more allies to accompany you on your adventure. Test your strength in the PVP Arena against thousands of other clans to see which clan rightfully deserves the throne.

FEATURES
• Free-to-play fantasy RPG!
• English, French, Spanish, Italian, German, Russian, Portuguese, and Japanese all supported
• THOUSANDS of different heroes to capture, evolve, and battle!
• Unique strategy combat system with different class strengths and weaknesses
• 100% animated characters – bring them to life on both your phone and tablet!
• Travel across lush and vibrant worlds, filled with valiant allies, fearful foes and unnamed beings!
• Thousands of clans for you and your friends to team up with and forge powerful alliances
• SFX and music scored by Bobby Tahouri
• Tons of monthly PVE and PVP tournaments with awesome rewards!

Come play with over 3 million other players who have downloaded HonorBound!

Use of this application is governed by the JuiceBox Terms of Use. Collection and use of personal data are subject to JuiceBox's Privacy Policy. Both policies are available at http://honorboundgame.com/tos.html

Use to be amazing. Played this game about a year agoe and loved it. Had many legendary guys and admittingly paid for some of them. Then I lost my phone. Recently tried to start playing again and can't find my account. Bummer whatever. Then I make a new account, spend 450 gems on a new monster, the game crashes and now won't let me log in. Please fix this, this is the best game on here, or was anyways...

I mean really? I leave a 2 star rating yesterday talking about how the game still has the bugs it did two years ago when I last played and enjoyed it after re-downloading. I wake up this morning with FIFTY THREE identical push notifications from the game. Still won't load past 62% on the opening screen. It's apparent JuiceBox has no intention of fixing these issues after multiple years, guess I'm on to better games.

Good but fed up Good game very fun and fun only thing is is that can you make the game load faster? Like when doing battles or from your kingdom to the map for me it takes so long other than that really good a must get game best RPG. Now it still keeps losing connection and I have to uninstall it and then reinstall it is have android. I looked and I have the same problem as Donald Garcia, Rob Wybrow, and DayFour

Pretty buggy When im in the story mode and i click to atack someone or claim a random price on the road it takes too much time to load and its not smooth even when it is loaded.. Anyway i got spammed with 210 notifications for around 1 minute and i was like wtfff.. The game is good but it needs to get optimised. LG G3.

Terrible developer. I have been locked out of the game for months at no fault of my own. I try to log in and it says there was an error with the server. It has been this way for so long and at the last they patched the game and I hoped against hope that they had finally fixed it. Alas I am still locked out. I shouldn't have to go to support every time they screw up as this is the 3rd time, uninstalling because this never happens with other ones, only this developer.