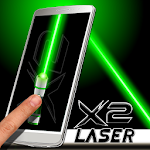 Laser pointer X2 simulator is a super fun prank game free. It simulates a laser pointer on your mobile device. Prank your friends and family making them believe you have mega powerful laser pointer which can simulate cracking the screen of your phone or tablet after storing energy for 20 seconds. In order to culminate the joke electric lightning shocks are simulated on your screen after this has been cracked. Every time the user tap on the screen, several electric shocks are born from the place you touched.

This free app is just a game that simulates a laser pointer simulator. All the effects are just simulated, it simulates a real laser pointer, but it is just a simulator. No laser light comes out from your phone. The effect when the screen becomes cracked and the electric lightning on the screen, are just images and simulated effects. It is designed to joke and have fun with your friends and family. Kids and children also can have so much fun with this app. Besides the laser pointer X2 simulator, the app also includes a mini game, which is used to obtain coins and unlock the flash light feature.

The free mini game included is a classic game which is a one tap game play game. The rules of the game are very simple: touch anywhere on the screen of your mobile device and one ball shall be thrown to the center of the central circle. The goal is to achieve that all the balls are thrown without 2 balls touching. Every 10 levels there is a monster gosht special level, which is a time based one. The player has a certain limited amount of time to pass the level. The difficulty of the game comes when there are difficult movement patterns which makes so difficult to find the way of putting all the balls on the sorrounding circumference where the initial and thrown balls move. Hundred of challenging levels are awaiting for being discovered.

Not good. Wish you can just automatically get the lazor light instead of paying coins!!