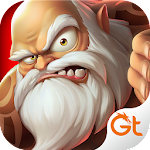 Join the action in one of the ultimate RPG adventure games and fight alongside your heroes and favorite Angel in the battle against the Devil Army. United Through Fire, your League of Angels will do whatever it takes to bring you victory!

Don’t miss this FREE rpg action sensation! Learn magic spells and prove your worth by fighting other brave warriors in intricate war games. Invade the impregnable citadel of the horrific Devil Prince and become true legends!

Features:
HUNDREDS OF CHOICES
-Countless Heroes to recruit.
-Train your favorite Angel and let it guide you along the way.
-Battle horrifying monsters of evil and become the one true leader!

POWER IN YOUR HANDS
-Enhance weapons equip your heroes with the finest gear of any action games.
-Empower your army to slash any enemy down with thrilling fighting games.
-Train, customize and level-up your avatar in true fantasy mmorpg fashion .

EPIC WARS
-Learn new magic spells to bolster your defenses.
-Build an unstoppable League of Angel with the power to save the world.
-Find out which heroes work best together and face evil together in battle.

Experience a revolution in role playing games! Download now and try one of the most ultimate rpg games free! Play today & chat with millions of people around the world. Will you find your match?

Visit our website today and begin your epic journey:
http://angelmobile.gtarcade.com/

I love it! There is so much to do that I'm never bored. The characters are great too! They've always compensated and fixed problems right away. I still love it even though I've had to start at the very beginning again.

Easy and Fun game It's a great game when you don't have anything to do and your bored. It's easy to play and anyone can play only downfall to it is unless u buy diamonds you won't get far.

Lost of account I recently wanted to go back to the game and decided to download and to my horror, I am unable to find my account in any of the login accounts. Please help me look into it thank you

Where the game described ? Downloaded because i read "do anything you want". You most certainly cannot. Its extremely linear gameplay, there is no free movement, heck no movement at all, no skills to raise as in crafting or anything, nothing to build, you cant explore, nope ya cant do anything you want unless you want to go mindlessly from one battle to another without doing anything in the battle or between them. False advertising at its extreme worst!!!

You'll get HOOKED! This game is amazing! Love all the different ways you can get items and diamonds and new angels etc. Since day one I've been hooked. My 3 year old downloaded this game by accident and im never deleting it lol.