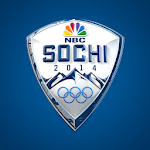 Experience the best of the 2014 Sochi Olympic Winter Games with the NBC Olympics Highlights and Results app.

Follow every event from Sochi, including news, video and photos for every sport, real-time results & schedules, medal counts and TV & Online listings. And during the nightly Primetime Show televised on NBC, the app will feature a second screen experience that makes a great companion to the on-air broadcast!

NBC Olympics video is only accessible in the U.S. and certain U.S. territories. The application requires a 3G, 4G or WiFi data connection. Watching video over a 3G or 4G connection may affect your wireless data plan.