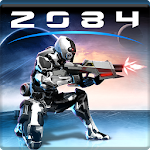 The year is 2084 and the galaxy is in chaos. Humanity has discovered alien technology allowing space travel between the planets, opening up the universe for exploration and conquest.

Forces around the solar system battle for supremacy, but one leader must rise up to unite the galaxy against all intergalactic invaders. Welcome to the ultimate sci-fi adventure, Rivals at War: 2084.

TRAIN an elite team of space marines. EQUIP these soldiers with weapons, helmets and armor for epic battles. ATTACK rival teams from around the solar system. CONQUER the galaxy, one planet at a time. FIGHT for victory and rule the universe!

* Star Map Story Mode - plot your conquest of the galaxy across 75 different planets.
* Rivals Mode - challenge your Facebook friends and go to war in head-to-head combat
* Daily Campaigns – crush the competition across three different skill levels to win rewards and prizes
* Strategy and tactics - select powerful tactic cards to influence each battle and overcome your opponents
* Player Achievements – progress through the game by completing over 45 special achievements

To those who keep complaining about the game This is a fun game that may be a pay to win game, but it's all about strategy. You can be a rank 35 and beat a rank 45. It's based on your team setup and tactics you choose. I have not payed money for the game and I have elite solders, so yes it may be frustrating at first. Just keep playing, you will reach to the top soon. And here is a tip, buy 10 dollar card packs to start getting gold soldiers, and complete offers to get the dollars needed. After that it should be easier to win campaigns.

Addictive and fun! I'm usually sceptical on these sort of games. Pay to play on, that sort of thing. This is nothing like that. You have a generous amount of time playing. Like 'lives' you have 'energy' and renews every 10 mins or so. It's very fun and addictive. Beautiful graphics. The thought of gearing up your own team and ranking yourself aswell as the team gives me a good reason to play. Very impressed.

definately well done great game, incredibly fun and it looks nice. its fairly easy to get bucks and with the free offers you get plenty of gold packs. energy is kind of irritating, wouldn't you want people playing your game as much as possible? the only thing is it's short. i wish there was more items and more levels of play than just chancing for better gold soldiers.

Awesome So Far... but this could be much better if you could add an auction to sell your cards to other players instead of instantly selling them. Also there is an issue with the rivals mode it consumes your cards and there is no declared winner of the match. Then, there is Google+ and Facebook connection neither of them can connect. I would really like to challenge my friends who have this game and invite those who don't.

Excellent!! No words can be said because im so happy for getting back my data!! Thanks to the support team that helped me restore it. Guys if you lost your data coz u dont remeber your password just send an email to the support, send them your team name and your team level or info about your team, and they gonna gladly help you getting back your data. Ive tried and they response very quick too.