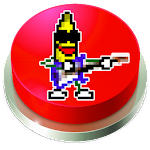 How to use the app
Simply press the button by touching the screen and enjoy of the banana dancer animation dancing the rock song of PBJT! Make jokes, have fun and trolley all your friends and family! Enjoy memes with a baseball hat!


When to use the application
You can use it whenever you want, Since it will always be available on your device in an app! To have fun, to nostalgia to remember the Banana Dance of the PBJT meme or to laugh at such an absurd app!
Where he at, there he go! Tic tac toe, break it down and freeze!

About the meme
Peanut Butter Jelly Time (PBJT ) is an animation of a dancing banana and the song It's Time to eat Jelly Peanut Butter. Known for being adorable and fun, the Dancing Banana video became a success in the early 2000s, which led him to be a viral meme, becoming dozens of parodies and videos of tribute on online video platforms and even merchandising.