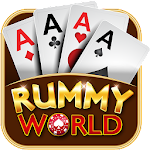 
Rummy is a classic card game where the objective is to be the first to get rid of all your cards, by creating melds, which can either be sets, three or four cards of the same rank, e.g. ♥8♠8♦8, or runs, which are three or more cards of the same suit in a sequence, e.g. ♥A♥2♥3. Aces are low, and sequences can not wrap around. There are many, many variations of Rummy that exist, this particular implementation is Basic Rummy, or Traditional Rummy.

Gameplay
The game have 2 players. There are only two players they each get 10 cardsAfter the cards are dealt the deck is put facedown on the table, and one card face up next to it, to start the discard pile. The player to the left of the dealer starts the hand, and gameplay goes as follows:

Start your turn by drawing card from either the deck or the discard pile.
If possible, lay down a meld on the table. You are allowed to put down many melds in each round (in some versions only one meld per turn is allowed).
Lay off cards on existing melds. For example if there's ♥5♥6♥7 on the table, and you have the ♥8 you may lay it off on the meld. Who put the meld down in the first place doesn't matter, as soon as a meld is on the table it doesn't belong to anyone anymore, anyone can use it. You are allowed to lay off as many cards as you want, and you may always lay off, also when you haven't put down a meld in the round.
End your turn by discarding one card onto the discard pile. If you drew from the discard pile you can not discard that card in the same round. If you only have one card left to discard you put it face down on the discard pile and win the game.

- Gin Rummy is a most popular card game for 2 players, where the aim is to
to meld your cards(sets and runs cards) as quickly as possible.
- Gin hands normally consist of 10 cards. However, if a player chooses to draw
so that 11 cards fit into melds, player can declare Big Gin in which case
the player receives a Big Gin bonus of Rocket? x20 31 points.