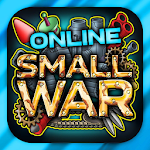 🏆 Various victory options 🏆
You can win either by destroying the headquarters of the enemy, or ahead of it in scientific development, or by growing the population to record levels.

📈 Level up soldiers 📈
Each of the presented races is unique and differs from the others in a set of starting characteristics, which allows you to use various tactics and strategies to achieve victory.
For example, the Atlanteans will be stronger near the water, and technological aliens are not afraid of artillery attacks.

🎌 Capture cities and resources 🎌
As with most turn-based strategies, during the game you will capture cities and oil fields in order to get enough population first for defense, and then for the destruction of the enemy.

⚛ Explore anomalies and collect bonuses ⚛
In addition, the game makes it possible to change the properties of the selected race by studying anomalies and studying sciences.

🗻 Take advantage of the terrain 🗻
But that is not all. Unlike chess, various cells of the playing field give certain fines and bonuses to your units. For example, hiding in the forest, you will avoid the attacks of enemy aircraft.

☠ Play turnbased strategy both offline and online ☠
Having plenty of work in offline mode, you can go online and challenge other players. After all, playing with a living opponent is much more interesting. The rank system used in the game will help determine the level of the opponent with whom you have to fight.

⭐⭐⭐ In general, we are waiting for you in Small War Online! ⭐⭐⭐
Show more
Older version of Small War 2 - turn-based strategy & tactics game APK