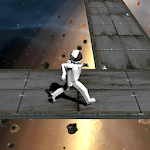 This is a simple yet challenging adventure arcade 3D endless runner game where you take an astronaut for a spacewalk. The only rule: Survive!

It is far out in the midst of nowhere that you find this astronaut out of his spaceship and on a mission trying to survive the space walk.

Theme:
The theme of the game is simple. You are in the outer space in this vast universe with nothing around. You have to walk down the path that is automatically generated when you move and you have to turn left or right accordingly to stay on the path. If you do not have a path beneath you, you will fall in the outer space and the game is over. You can restart the game as many time as you want.

Gameplay:
Gameplay includes swiping left to move the player to its left and swiping right to move to player to its right. Please note that the left and the right turn are relative to the player and not as seen on the screen (for example player's left). This creates an extra fun challenge to play the game.

Updates:
The latest update of this game has two different astronaut types for you to select. You can also select from two different space backgrounds - one showcasing a brighter blue galaxy and the other one highlighting the darker space with a lot of space objects.

This game has a classic arcade video gameplay style but with a modern taste. As you move along, the speed of the player increases gradually. This game is fun but also requires one's mental agility, stealth, and concentration. You have limited time to think and decide on your next turn and hence your reflex & focus is also tested with the game. One wrong move and you will fall in the outer space.

The game is full of action due to its fast gameplay. Game is free to play. Once you use up all the lives, you can restore new lives for free. Alternatively, you can get unlimited lives from within the game for unlimited gameplay. It is certainly challenging and from the initial feedback that we received from our beta players, the game trains your brain and improves brain sharpness. You have got very limited time to pick your next move/turn for your astronaut. Again, survival is the key.

So enjoy this survival-based space action game, beat the current high scores and make the impossible, possible. Your astronaut will thank you.

Whats coming?
We will be providing some exciting updates in coming weeks. More feature launches included. One of the exciting feature that we have planned is Missions. You will be able to go on a space mission where you will complete the mission requirement and progress to the next challenge. Stay tuned.