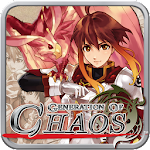 Get via Downloader 1.7M

After “Spectral Souls”, HyperDevbox strikes again with “Generation of Chaos”, a new 100-hour game experience.
Build and govern your own kingdom. Engage in 30 vs 30 thrilling battles in real time to defend and expand your territory. Immerse yourself into each kingdom’s story and play as over 150 characters through 10 different campaigns.

Story:
The Dravanian revolution ended in 1701 leaving a nation in ruins. In the wake of this chaos, Minister Zeo deftly rose to emerge as Dravania’s new leader. Before long, Zeo began to transform Dravania into a powerful military force. Now, Dravania has risen from the ashes to restore peace and prosperity to the rest of Lost Grounds…


©2011-2015 IDEA FACTORY, developed for Android, licensed and published by HYPERDEVBOX .

Invigoration of chaos This game plays like its a spiritual successor to a game called Dragon force for the Sega Saturn. Both are tactical in approach. Both drop you into the game with very little, if any, explanation of what do. However, if you take the time to figure it all out than both become addicting and well worth buying

One of the best phone games I've played. I probably sunk over 50 hours before I beat just one of the kingdom's. The controls could have been ported over with more usability but all in all a solid game. PS. Reference the manual that comes with the game it is needed to understand some of the important mechanics.

Great, but My saves keep disappearing. No matter how many times I play a new game two days later my saves are gone again. This was my go-to game to play in my free time outside of home, but unfortunately any progress I make is gone in just a few days.

4 Stars Notbad strategy game Kingdom It's something like fantasy tactics. Different Storyline to progress n freedom to choose. U can recruit n search for items. lots of generals to customize. Buy sell weapons. Command troops. Invest in kingdom. Good depth n will keep u occupied.1.8gb of Space in your main storage of the phone!!! 1 thing I hate is no option to install to extension memory cards! 3.5 stars not user friendly battle is not easy can be Complicated. Read help menu 1st.

The internet connection requirement is an unnecessary hinderance I've played and enjoyed idea factory games before and I expect I'll enjoy this one, once the internet connection requirement is removed. See, I'm a truck driver by trade, so I can't rely one there being internet available when I have the time to play games. No other games I have on my Nvidia Shield tablet require a live connection, nor do any of the games on my other devices, (3DS, Vita, iOS, PC), require one either. Heck, none of my other idea factory/hyperdevbox games require it. Please fix.