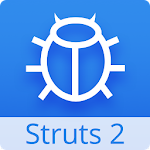 What's Struts 2 flaw? Why you should care about it?

Apache Struts 2 is a component that helps developers to build websites using Java technology and powers many web servers worldwide, including those serving governmental, NGO, banking / financial, and corporate websites.

A serious flaw was discovered, dubbed “S2-020”, it was announced by the Struts 2 team as a flaw that allowed hackers to steal data stored on a web server. Data that could be stolen included passwords, banking information, and other sensitive details.

We advise you to wait for website administrators to take remedial measures, and to avoid transmitting sensitive data on these sites until this happens.

☆ Developed by CM Security, the world's most trusted Android antivirus.

☆ Scan your browsing history and detect whether your recently visited websites are affected by Struts 2 flaw.

A security apps that force closes Downloaded this app and uninstalled it 3 times each time I installed it and tried to open it it just said the program stopped unexpectedly and it forced closed it. What good is a security app when you can't even get it to work!!! All their other apps that they cannot integrate into the one app works fine but this one does not??? Will update if I can ever get this to download and work......

When I can dowload backup, have all your mods in one (1) app, you will get the stars you ask for as well as the like on fb. Nothing worse than being asked for he best rating when you cant offer everything you suggest! STILL NO BACKUP FOR TABLET. WTF. 1 MORE NOTIFACTION FOR BACKUP AND I WILL FIND ANOTHER VENDOR. Cheat Me

Love it. This app is designed to scan your device and its web history for the sole purpose of keeping your sensitive data and personal information from being stolen by hackers. Please stop whining about so many different apps. Each CM app is designed to do a different job. They each work to complement each other so be smart and not be lazy download them all and they will do what each is designed to do and that is protect your smartphone and tablet. To CM security keep up the good work at protecting our phones.

If it is doing what is says? I do not know much about these types of apps. I am just going along with what the CM Security app is recommending cause it seems to be working well as it says, also. Cleans things up nice with the Clean Sweeper app! Combining all these above into one would be nice like the others say in reviews. Too much clutter! Streamline into one please! Great free apps though! Superb!

Finally a company that gets it done, the right way! Every single app from the Cheetah Mobile family has been gold! If you want safe & secure applications that are RELIABLE, then definitely try CM's many choices. Apps are designed to help, not frustrate or aggravate which many do, but CM's apps definitely give a sense of security which essentially makes me happy, so thanks guys, keep up the great work!! ????