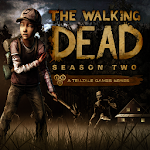 The Walking Dead: Season Two is a five-part (Episodes 2-5 can be purchased via in-app) game series that continues the story of Clementine, a young girl orphaned by the undead apocalypse. Left to fend for herself, she has been forced to learn how to survive in a world gone mad. Many months have passed since the events seen in Season One of The Walking Dead, and Clementine is searching for safety. But what can an ordinary child do to stay alive when the living can be just as bad – and sometimes worse – than the dead? As Clementine, you will be tested by situations and dilemmas that will test your morals and your instinct for survival. Your decisions and actions will change the story around you, in this sequel to 2012’s Game of the Year.

• Decisions you made in Season One and in 400 Days will affect your story in Season Two
• Play as Clementine, an orphaned girl forced to grow up fast by the world around her
• Meet new survivors, explore new locations and make gruesome choices

The game will run on the following devices but users may experience performance issues:

( I'm not a weathy man ) Incredible As all of Tell Tale games this one comes in with an all star rating. Also the Creators of the Games, Tales from the Boarderland, Game of Thrones, and The Wolf Among Us these guys only make gold. The choices you make in the telltale games really do affect the outcome of the story and reactions of the supporting characters, giving this game amazing replay value. With console quality graphics, a beautifully crafted story, and charachter depth that draws you into the story all of Tell Tale games are priceless.

Love,love,love I love this game!Defenetly 5 stars (Even more then that)!! I wach pewdiepie play this and now playing it my self!!SO COOL!I love it soooooo much!!But one thing!!!WHY?WHY?WHY? Do i have to buy the next episodes plz don't do this to me please don't! !Just make episode 1 free (It is already) episode 2 and episode 3 that all plaese im begging you plaese! !I love this game just plaese make it free!! ?????!!I am dying for the next parts!I mean whaching people on youtube play it is good but i want to make my own choices! please! Please make it free!Also, all the episodes are out now so why u making us pay there out !!

Awesome I wish you could rate with half a star cause it was more like 4 1/2 stars. Why cause I didn't really like the ending as much. 1) You should've been able to select to shoot that couple and then allow that boy to come in and start a new group with kids and teenagers with Jane as Clementine's second in command. 2) I really just thought the first one was just a little bit better just cause of the ending in this one. All in all in was a great series... Now I'm getting ready to play the wolf among us can't wait.

Awesome series Downloaded it just to check season price on Android ($10 and change). I had season 1 on vita, and will likely get season 2 for pc (steam sale has it under $9). I wish they made the season purchases valid for all supported devices and not all separate. I'd love to play on pc when home and mobile while out. Just can't justify the cost, especially without unified saves

They did it again! Holy cow! Oh, you dudes at TTG are the most talented game developers out there for me! I just love your games with all my heart and soul. Ain't much to tell - you must be turning to a walker if you are still considering whether to download it on your device! Oh, by the way - the game sometimes is not responding to my touches... Seeing Clementine die again and again just... sad, you know?