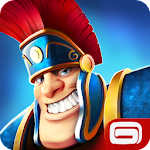 Sound the call to battle and join legions of players online in a battle to control the Roman Empire! Total Conquest is an exciting and strategic social game where you are a Roman governor developing your own city-state and army. But with Caesar dead, there’s no more playing games: You’ll need to join a powerful Legion -- or forge your own -- to defeat your enemies, protect your lands, and reign supreme. Vae victis!
Finally, a real war strategy game comes to Android!

BUILD A MIGHTY ROMAN PROVINCE
√ Build and manage your own unique city-state
√ Defend your city with Towers, Traps, Walls, Gates and garrisoned units

FIGHT EPIC BATTLES
√ Hire, train and upgrade 10 different unit types, each with a specific role
√ Take on a challenging solo campaign to master the art of war games
√ Battle players from around the world and lead your army to victory

For fans of free strategy social games, army/war games, or anyone who enjoys a good online fight.
Enter the battle, get ready for the war, and enjoy hours of fun!

* All this available on smartphones and tablets!

Good Often with these Clash of Clans copies I find that they are just a reskin of coc but with this game there are some noticeable improvements. The main thing I think that sets this apart is the difference in the troops which was the reason I downloaded this. The troops are different and have more fluid animations than many competitors. My only complaint so far is that this game seems to need a good amount of processing power. I play on the Samsung S6 so it runs fine, but I could see an older device having :(

Crashes and cheats I was enjoying this game for a while until the crashes started. Seems to crash randomly. Never happened before the last update. This is especially frustrating if you are in a battle because you automatically lose. Additionally, I have been attacked in the game by cheaters with cyclopes. I know it was a cheater because there was no way for that player to have a cyclops.

Needs more updates. They need to add in more updates before this game really becomes a mess, just way to many bugs. Also, they need to get rid of the ads.. it gets in our way of our gameplay. As you guys notice there isnt even a no-ads payment in the token store which is completely awful. Please fix this gameloft. If it does get fixed I'll give you guys 5 stars. Period.

TOP PLAYER ON WINDOWS EDITION i played this game for 2 years on windows and you ruined it. You restarted my glory and you let kev M beat FIDELES with his hacked account. Conquest mode is always under maintenence. Gameloft you let me down. You ruined the game i liked - CORNELIUS S, ZUGWANGii, and MLG SOULCOM

Mostly great The game is great and I love it but the new conquest is way too unbalanced. All the newer players always win conquest because they train troops fast and they attack easy bases. Whereas for experienced players their troops take hours to train and the bases they attack is harder. Pls make an effort to balance it out like in war by adding a cool down time.