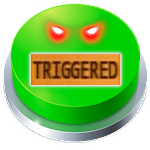 Now you have here the sound button of the classic Triggered meme, so you can press it whenever you want! By having it on your mobile device, you can use it whenever you need it in this 2020!

Among the elements included in this application are:
- Interactive meme button to press (or hold) and execute triggered meme
- trigger warning meme sound
- Funny gif animation of this famous viral of a dog in shock and with the triggered sign
- Attractive and simple background and design set in this meme

To use this app, therefore, you just have to press the button at the bottom of the screen, and it would be! The meme will sound through your device and the funny animation of the dog in shock will be activated!

Press this button when someone is in shock or has a trauma about something, in a clear prank mode! Make irony, pranks and parody with this button!

About this meme
Trigger is a term that refers to any stimulus that evokes the memory of a traumatic event or episode. While the word is most commonly used in the context of Posttraumatic Stress Disorder (PTSD), it has since been adopted by those on social networks to refer to any current issue that is considered contentious or debatable, and to a lesser extent, The term has also been reappropriated as an ironic term used by its detractors to criticize certain issues that may be considered too trivial or irrelevant to discuss them in depth.