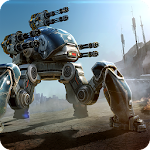 War Robots is an action-packed multiplayer game with 6 vs. 6 team battles in real-time! Join the ranks of the Metal Warriors!

"If you are looking for something new and love robots and multiplayer battles it's worth the download to check it out since initially it won’t cost you anything." - Droid Gamers

"War Robots is an excellent game that works well no matter if you play it on your Android smartphone or tablet, and it’s such a good multiplayer game that it can give people a competitive challenge while on the move." - AndroidHeadlines

"As a high-end, team-based online multiplayer mech game on Android, it's also fairly unique to the platform." - Android Police

It's a time of war, pilot! Are you ready for surprise attacks, intricate tactical maneuvers and the many sneaky tricks your rivals have in store for you? Destroy enemy robots, capture all the beacons, and upgrade your weapons to increase combat strength, speed, and durability of your battle robot. Prove yourself in each map and use different strategies and tactics to emerge victorious from battle!

MAIN FEATURES:
– 34 battle robots with different strengths;
– more than 30 weapon types, including ballistic missiles, energy and plasma guns. What will you choose?
– many possible combinations of robots and weapons. Create a war machine to fit your own play style;
– create your own clan and lead it to glorious victories;
– join epic PvP battles against rivals from all over the world;
– complete military tasks for bonuses and earn the Best Pilot title.

Onward, soldier! Victory is yours!

Want to talk about the game or find allies?
Join us on Facebook: https://www.facebook.com/warrobots/
Follow us on Twitter: https://twitter.com/WWR_by_Pixonic
Watch new videos on YouTube: https://www.youtube.com/user/WALKINGWARROBOTS
Find all about WR on our Knowledge Base: http://faq.wwr.mobi/hc/en-us/

I really hated this game at first, when i was trying it on a friend's phone. It has really grown on me since then, i love it. I've been playing it for years now and still love it; the graphics are amazing, the game play is smooth, my clan is great, there's always new stuff to do or new bots/weapons to acquire. Yes, there are some people playing that kinda ruin a battle for your team but Hey, it's just a game and you still get points if you lose. Do your best and have fun.

Great start! No glitches. Performs smoothly! One of the best games on Android!! Must download Belive me I have never spent a single penny of "real" money and the game has never been unfair to me. Its really very good game. They found a sweet spot to balance both paid and free players. You just need to go on playing. I got the costliest robot of the market for free. Keep playing you'll eventually be strong enough and then you'll never stop to play.

After being so long on the game I can see that the development team behind this game is pretty committed. I can see they really put effort into debugging, improving and renewing some elements of the game, I've decided to increase the star counts for War Robots (This is the original one). It's one heck of a game for mobile device I can tell you that. As for attaining the "best robots" or the "best weapons" in the game, it's hard but it's not impossible. Just take part in the festive events... and you don't neccessarily need the "best bots" to annihilate your opponents...

Supposed random game is not random. You only win the lowest prices until you start spending gold. Black market is the same. Also it will take you a decade before you get the best robots unless you shell out your hard earned money. I hope the drop off scheme would earn me points, however it's just for one type of robot.

This game is very much Pay to Win. So expect some people to crush you. All the "gambling" games are fixed to make sure you get the lowest possible reward. Don't waste your gold gambling. All that said this game is worth 5 stars just for the gameplay. The graphics are amazing and the game is fun even when you end up against someone spending hundreds of real dollars on robots and gear. Be patient. You may not always win or do well but in time you can give all but the most hardcore spenders a run for their money (all pun intended)