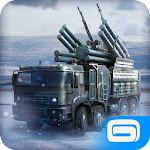 ★★★★★Happy 5th Anniversary!!!★★★★★
Build your army, plan your attack and deploy your forces for an all-out, modern war game that spans the entire world, from the deepest ocean to the skies above!

Battle against the KRA, a rogue army with invasion plans for every nation. Only you and your allies have the power and skills to wipe them out in the exciting Solo Campaign mode. But you can also challenge your friends for fun and glory in the challenging multiplayer mode that truly tests your strategy.

Take advantage of the rich social features to find allies and devise your next cunning strike with the chat feature. Then join or create your own Faction to combine forces and truly become a force to be reckoned with! You can even make your name known on the leaderboards by challenging rivals and skillfully stealing their resources.

A TRUE WORLD WAR
√ Engage in innovative battles across the globe and on various terrains including scorching deserts, urban cityscapes, ocean depths and anywhere else the war spreads.

AWAKEN THE SUPER SOLDIER
√ Immerse yourself in the only modern-war strategy game on the market that offers deep-sea exploration and battles!
√ Construct the new super unit: Atlas. This immortal war robot is a relic from an ancient nation, but can be the ultimate game-changer in battle!

THE FACTION FACTOR
√ Form a Faction with your friends and allies to pool your powers, talk strategy, help each other out, and achieve levels of power that would be all but impossible alone.
√ Connect with your friends via Facebook and call for reinforcements from their units during battle.
√ Build a Faction Base where you and your allies can build and shared facility that you must all help to protect from invaders.
√ Contribute units to become the invader and strike rival Faction Bases for huge rewards and ultimate bragging rights.

This app allows you to purchase virtual items within the app and may contain third party advertisements that may redirect you to a third party site.

Absolutely appalling customer service. I have waited over 3 months for GL to resolve a problem. You only get a reply after sending several emails and even then it's them telling you to be patient. Please do not spend money on this app

Fun game terrible support This game is fun, the people are awesome, and a good time waster but it was built on glass. Frequent crashes, synchronization issues, and slow loading make this game OK... give it a little more attention devs!

World at Arms Awesome game, gold stars are a bit expensive, would probably get more sales if regular price was lower. But game is very fun.

Guys, I'm having serious trouble. After the new version update, the game fails to load. Can someone please help?